A Chance for Children on Water Safety

A CHANCE FOR CHILDREN FOR WATER SAFETY

Once upon a time there was a poor family who had a young son, named Dear. The economical crises forced them to abandon their home and to settle down in a village. After they moved, he had to leave his friends from his old neighborhood.

The family went to live in a semi-demolished house on the mountain. His parents worked very hard from morning to night to survive. So he had to spend a lot of time during the day at home alone; without his parents and without his friends.

A few weeks after they moved, he became really bored and feeling very lonely. One morning, before his parents left for work, he asked for permission to leave the house. His mother agreed, as long as he was very careful in whatever he was planning to do. He wore his nice clean clothes that he wore to church, and walked out to find new friends. He walked down the hill and went towards the sea. 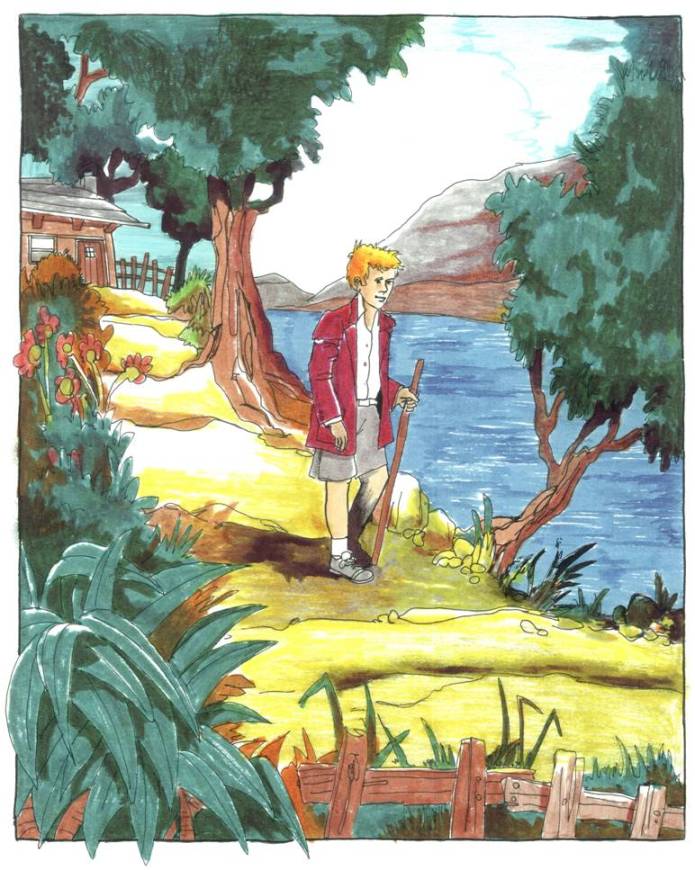 In down-town, the children were mean to him.

“Look at this shirt! He must be rich.”

“Then, he must give us money to be with us. Hey you, come here.”

“Do you have anything to give us?”

“The only thing I can give you, is my friendship!”

Dear lost his smile, when Bully, the leader of the gang, spoke.

“Can you hit and rob somebody?”

“See? You are not worthy! What do you want around here?”

“I am looking for new friends. I am a child. Give me a chance.”

“You are too good for us! Go away!” Bully answered with a loud laugh.

Dear had difficulty holding his tears. He walked away. He didn’t want them to see him crying, even though he knew deep down it is an honor for a child to cry and not to be ashamed about it. He felt lucky that they didn’t end up hitting him. 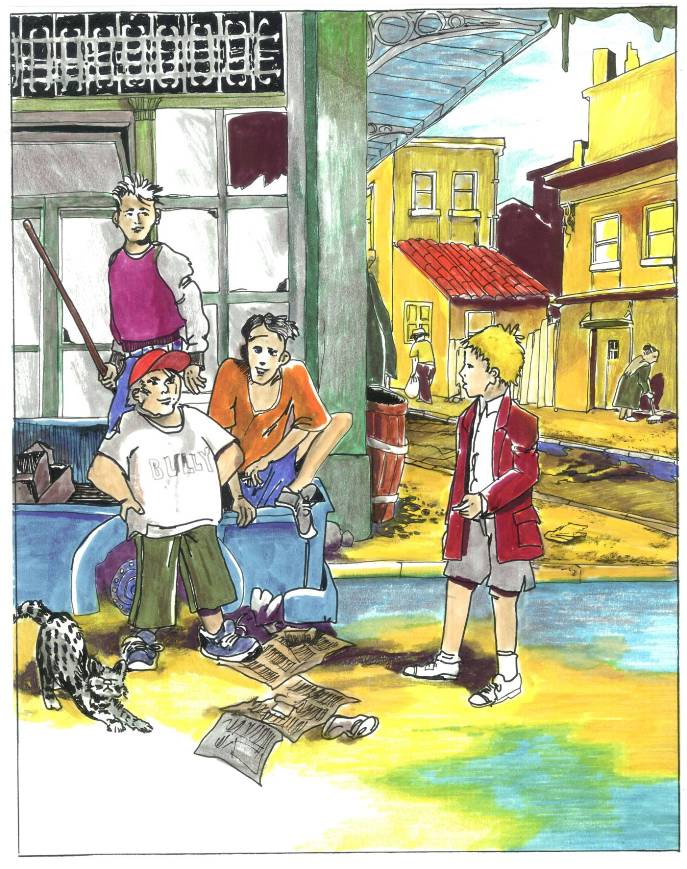 Walking quickly, he reached a garden of a rich house, in which he met Little Precious. He smiled and thought:

“Oh she looks like a nice girl. She does not have friends, so she would like to play with me”.

“Hello there”, he said with confidence.

“Who are you? What do you want?” she answered while she was combing her wet hair.

“I don’t know you. There is no way we can be friends!”

Dear having turned red he tried to explain:

“If you won’t be my friend, I will be lonely. Let’s play only for a little bit.”

Little Precious looked towards his dirty shoes. He felt more confident and tried to win her over.

“I am well dressed like you. Look at me!”

“You are such a fool, don’t try to persuade me that we look alike. We are not the same!” she answered.

Her parents came out to the garden to have breakfast. She started singing to attract their attention. Dear did not say a word. He lowered his head and disappeared. It was not in his character to fight. 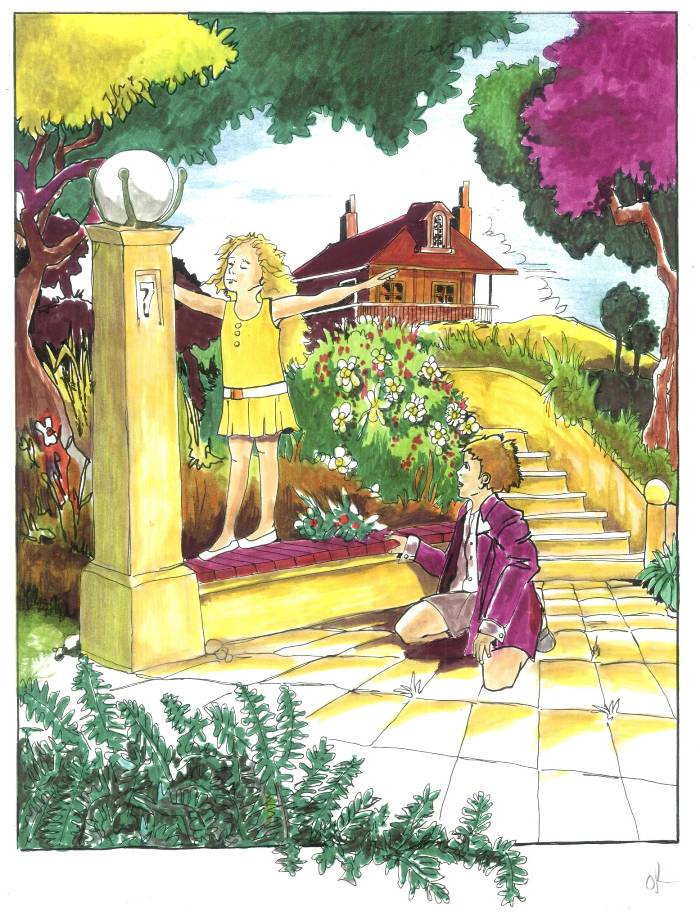 After a little while he reached the square. There were people walking by, who were going to work. This place reminded him his old way of life. It was so beautiful then. Everybody loved him. He had many friends.

The hot mid-day sun had made him feel tired. He fell asleep on the bench and had two dreams. In the first dream, he saw that he was coming back from shopping with his Grandpapa. He kissed him and said:

“I am very poor to make you happy with something that can be bought. I will give you some advice which would be of greater value even from the most expensive gift. Always remember that the most important things in life should be love and learning.”

Dear rarely got presents from his parents because they were poor. He liked the advice. He wrote it on a piece of paper so he could remember it and he made it his purpose in life. 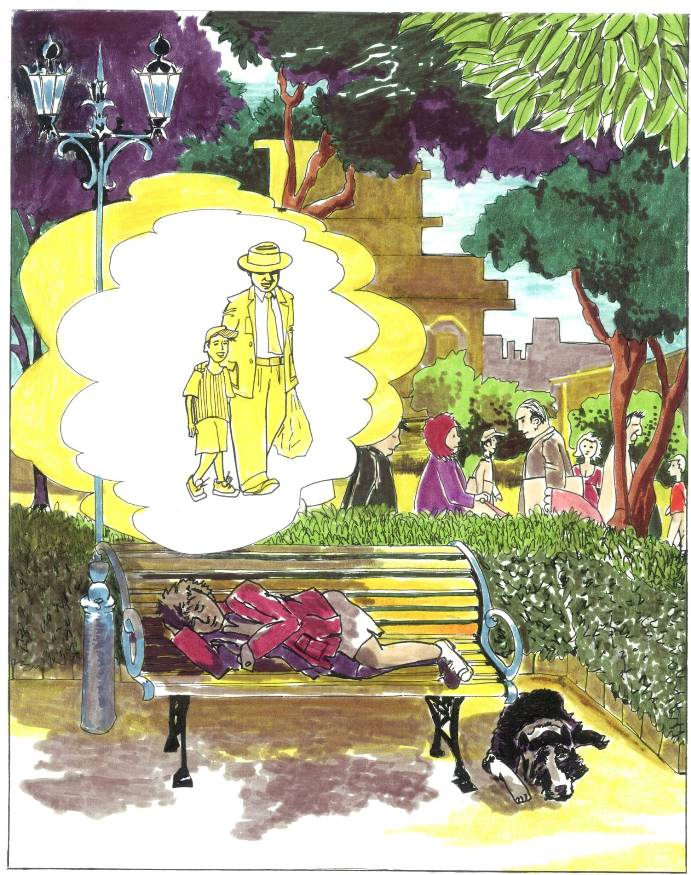 In his second dream he saw that he was playing with his friends. He really missed their company and their games in the poor neighborhood. With Frienda he had the best adventures. He would not complain when his best friend stuttered when she spoke, when she always had dirty hands, when she covered her ears when he was clapping and because she always sounded like a broken record. He had learned about unconditional loving. They spent a lot of hours dreaming about the future.

A day before he moved to his new house, they went for their last walk to the beach. They were both very sad that they may not see each other again. To make him feel better, she shared a phrase from a book she had read:

“There is always a reason for whatever happens, which often we discover later. In life we are tested with something negative at first, before the positive comes along. So don’t be upset.”

Dear felt better from what she said and let her hug him for the last time. 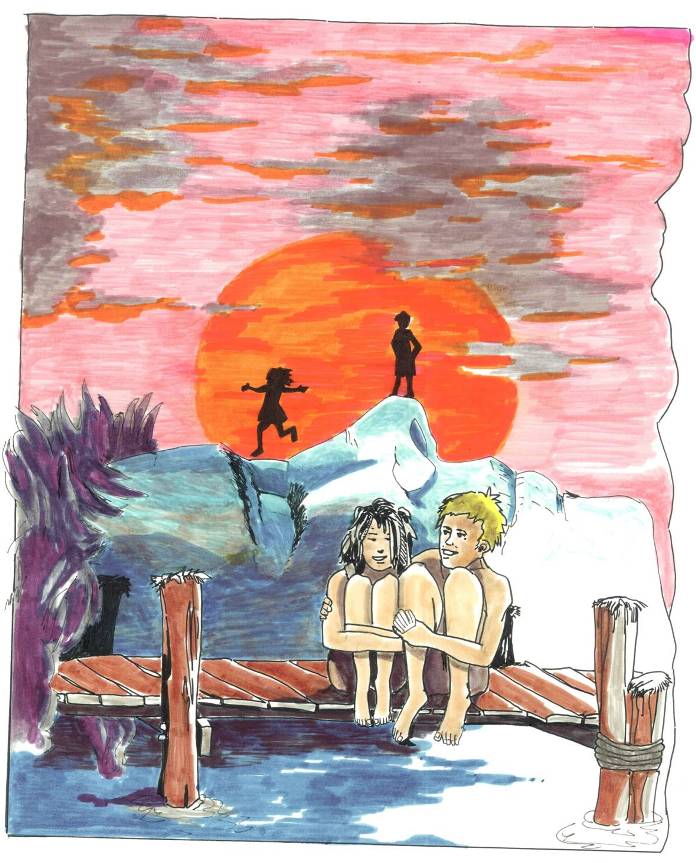 A short time later Dear got up in a bad mood. He wanted to be in a team and to find friends to be able to apply his Grandpapa’s advice.

“Oh Gosh, nobody asked me to be their friend today”, he thought.

He walked to the beach. Some children were happily making a castle on the sand.

“What is your name?” Jealous asked, a boy who lived at the beach.

“Did you come from the mountain?”

“I am a child. Give me a chance. Do you want to be friends?”

“Look. First we will compete in swimming and then we can become friends.”

“OK”, he agreed and took his clothes off.

They dove in the water and started swimming. Dear swum faster and finished first. When they got out of the water, he walked towards Jealous who lost. Jealous turned his back because he was angry.

“I always win in a race. The child of the mountain beat me! I won’t tolerate it!” he thought.

Dear didn’t worry at all. “He loses. I win. I would have shared with him a thousand wonderful things about the mountain. Now he is never going to find out. I am going to discover everything about his beach.” 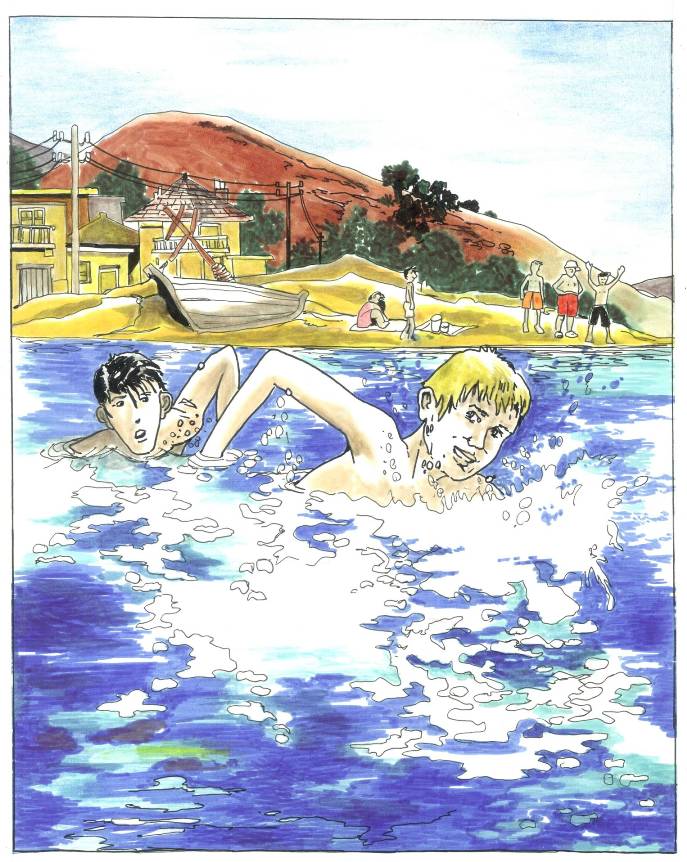 A few hours later, he started to worry that his life would be boring at the village because he wouldn’t have friends to share love and learning. From a distance he saw a fish boat in which the fishermen were singing. He thought that if he swam there, maybe they would accept him in their group.

He began swimming on his own. Before he knew it, he was caught in a very strong current and he became exhausted. He started drowning. At the same time, at another area of the beach, a crew team was filming a television series. The director, who was known with the nick-name Savey, froze. He realized that the young boy was in great danger and swam very quickly to save him. As you can see, he was a lifeguard. 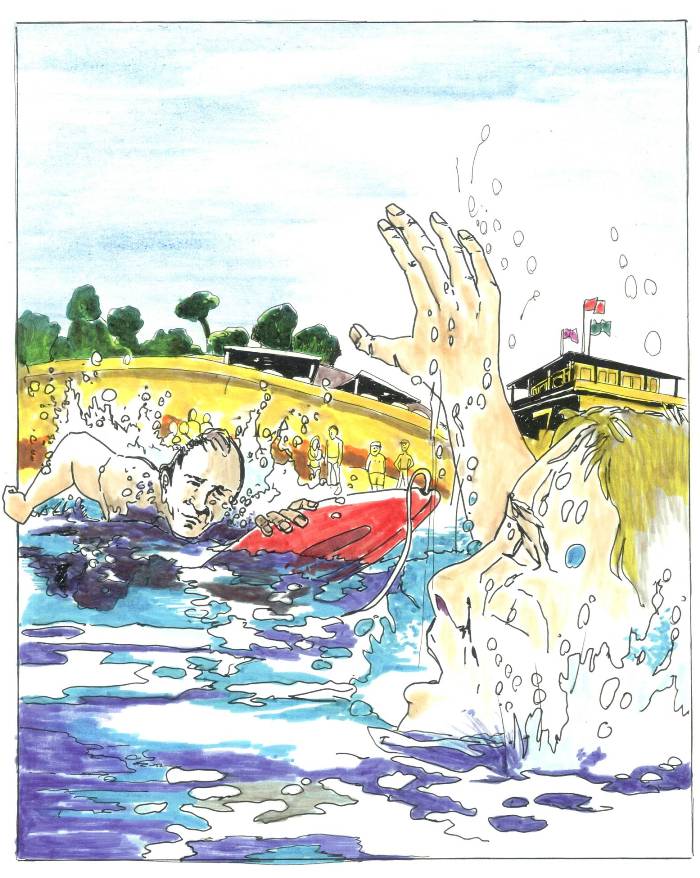 “Everybody move away. The child urgently needs help”, Savey shouted as he was carrying him out of the water unconscious.

Immediately everyone from the film crew and the actors did what he said. They were speechless. They were anxious to see whether the child would survive. They trusted his abilities because, apart from being a director, he had forty years of experience as a lifeguard. Savey gave him the “kiss of life”. After the initial attempts, he brought him back to life.

“Why did you swim alone? It is dangerous to swim in a sea with currents and no lifejacket”, he said.

“I have no friends. No one wants me. I am a child and nobody gives me a chance”, Dear replied and started crying.

Savey was touched from what the child said.

“Don’t worry. Do you want to come to my Camp? You will like it very much”, he suggested.

“Yes. Thank you very much”, Dear answered without knowing what he would come across. 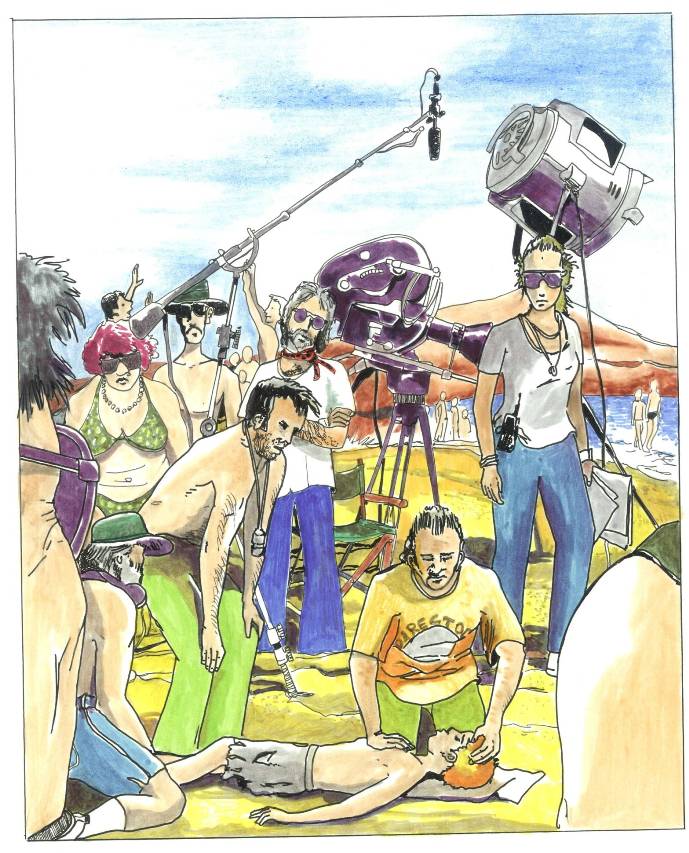 Savey took him by the hand and they reached a place with many children. They were welcomed by a blond good looking woman, which was playing with a child. Dear’s face glowed with happiness. He remembered Frienda which had said that the universe challenges us with something bad before we have something good…

“I present you a new member of our team”, Savey said.

“What is your name?” the good looking woman asked.

“My name is Smiley”.

“Will I have love and learning here?”

“Of course you will. Here we give only love and learning to ALL children”, she told him.

“I am Choosy. We can be friends! Let’s go and play”, answered the child who was gasping for air after running around. He grabbed his hand and took him to the other children.

Dear was so excited from the kindness of his new friends. He had succeeded his goal. He was a member of a team.

After some time, when the television series had finished playing, Savey asked from Dear to be the one that would present the new name of the children’s camp. Smiley gave him a sign that this was the time.

Dear was so happy and pulled the sheet away. The name of the team was revealed: “A Chance for Children”. Five children were holding their hands as a symbol. Everyone started clapping. His parents were proud of him. Dear presumed that this name came from his phrase “I am a child. Give me a chance”. He felt so proud of himself. However, he never expressed it, because he remembered how selfish all the children that he met looked like, when they showed their false pride. His reward was the smile on the children’s faces after they saw the new name.

They all walked into the building. Dear went in last and closed the door. He was very happy because, closing the door of the fairy tale, he knew that he was opening a door… to reality. And they lived long and happily together. They still are!

Source: The above text, is part of the fairy tale children's book, "A Chance for Children" written by Dr. Stathis Avramidis and illustrated by Nikos Kouremenos. It is partially based on true events from the life and work of the Creator, Director and Producer of the TV series "Baywatch", Gregory J. Bonann, and his wife and screenwriter, Tai Collins; they founded "Camp Baywatch" that was later renamed to "A Chance for Children Foundation" for teaching, among other things, water safety to orphan and homeless children. The fairy tale is reproduced with permission by its creators and by the founders of this organization, as means for raising awareness to children on water safety.

You have read the module "A Chance for Children for Water Safety". Great!

Now, why not dedicate another 10 minutes to answer some questions to ascertain your level of comprehension? If you answer correctly, you will receive a Certificate of Accomplishment.