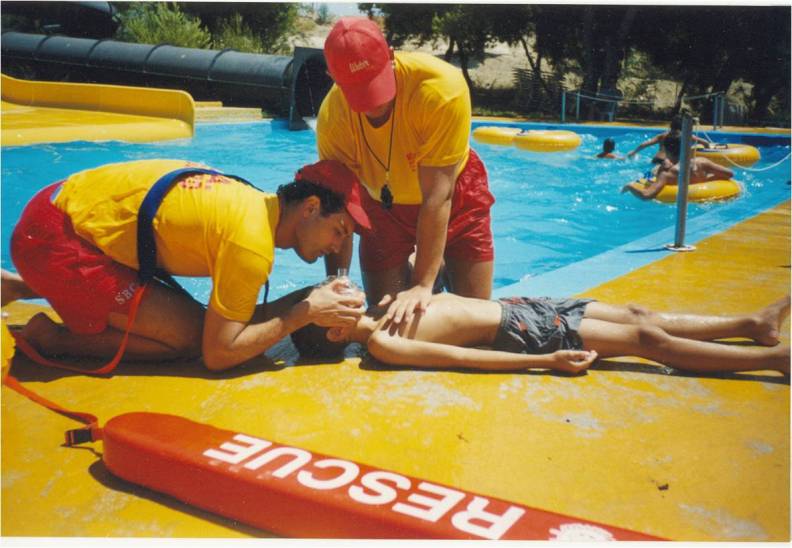 The Definition of Drowning

Drowning is the process of experiencing respiratory impairment from submersion/ immersion in liquid. Drowning outcomes should be classified as: death, morbidity, and no morbidity. This definition does not imply fatality, or even the necessity for medical treatment after removal of the cause, nor that any fluid necessarily enters the lungs. There was also consensus that the terms wet, dry, active, passive, silent, and secondary drowning should no longer be used.

The 4W Model of Drowning

According to the 4W Model of Drowning, when there is human activity in, on, around, near and under an aquatic environment, then, a drowning incident might happen to whomever (due to victim’s or rescuer’s mistake), wherever and under whatever circumstances. The factors that determine the outcome of drowning incidents are, in order of significance, rescuer characteristics (Who 1), casualty characteristics (Who 2), location (Wherever), and general circumstances (Whatever). Rescuer characteristics, and their interaction with other factors (mainly with casualty characteristics), appear to largely determine the outcome of drowning incidents. Risk taking behaviour leads to drowning when casualties are willing to seek pleasure by engaging themselves in aquatic activities with risk that perceive as controllable. The 4W model of drowning is a promising tool in lifesaving and lifeguarding.

The 5 Minute Scanning Strategy teaches lifeguards a systematic approach to surveying their designated area. This method used physiological and psychological research to produce a simple yet effective system for lifeguards. This simple yet effective system requires lifeguards to change their posture and visual scanning pattern every 5 minutes. Lifeguards must count the people in their zone each time they change their posture or scanning strategy (every 5 minutes). Physiological and psychological research has shown that after 15 minutes of performing a simple task, a person's performance on that task gets worse. The Five Minute Scanning Strategy® was developed to help lifeguards stay alert while performing the task of watching people in the water.

Lifesavers often discuss and analyze rescue and drowning incidents. The C-Zones Framework was designed to serve as an aid to such discussions. It is constituted by a number of zones (i.e., C1-concern, C2-crisis, C3-critical, C4-cardio-pulmonary resuscitation (CPR), C5-coma, C6-conclusion) and is simple enough to be easily remembered and quickly drawn on a piece of paper yet sufficiently detailed to be a serious analytical tool. The use of multicolored or different style lines permits the comparison of numerous casualty variations and outcomes on the one framework. The standard framework has a 20 min time limit describing the progress of an incident from its beginning to conclusion, but other versions of the framework are possible by adjusting the timing.

Before an event (to entering the framework) a person feels comfortable and non-threatened in, on, or near water and is in the Comfort Zone (C0). The Concern Zone (C1) describes the situation where an event changes the person’s feeling from being comfortable to being concerned (e.g., a fall into deep water). The Crisis Zone (C2) describes the situation when the person believes that his or her life is threatened. The Critical Zone (C3), describes the situation of a person who is close to exhaustion and who is losing the ability to self-help or to help a rescuer and may be about to panic or is already panicky, a point at which seconds count if the person is to survive. The CPR or Cardio- Pulmonary Resuscitation Zone (C4) depicts an unconscious, non breathing person with no heart beat in need of immediate life support. The Coma Zone (C5) portrays a person who has fallen into a coma. At the conclusion of an event, the Conclusion Zone C6, a casualty exits the framework in one of a number of possible physical states. Based on the International Life Saving drowning classification, the person is classified as either a fatal or nonfatal drowning. The working zones consist of C1 to C5. Each of the zones is divided into two subareas called minor and major to illustrate different degrees (or a deepening progression) within each zone. For example, in the Critical Zone (C3) minor, the person is close to unconsciousness but has not yet panicked; in Critical Zone (C3) major, the person is in a state of panic. This brief outline of the zones is expanded with examples later. 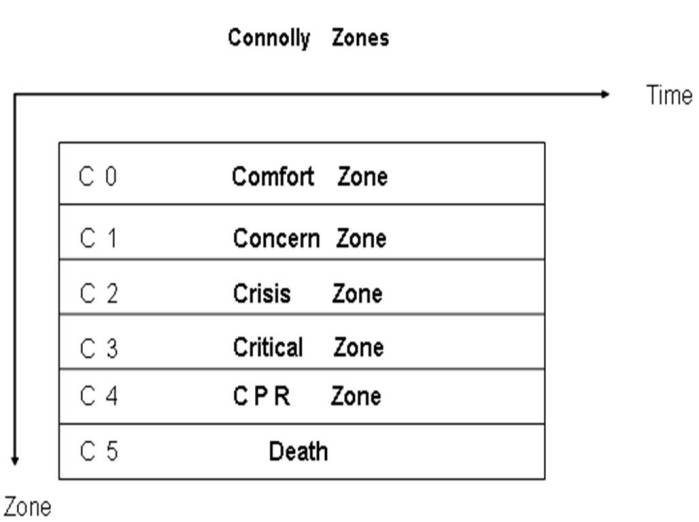 Overall, this framework can serve as a teaching aid and useful feedback tool offering a visual overview of rescue options and their potential or likely consequences at various stages in the drowning process. This information can be valuable to lifesavers, lifeguards, professional rescuers, lawyers, expert witnesses, and judges.

Drowning is a leading cause of death worldwide. Injury prevention models and theories aiming to educate people might play a role in drowning reduction. A framework for drowning prevention interventions based on the Haddon Matrix is proposed as means that can possibly assist professional rescuers in developing drowning prevention interventions. Given that the role of a lifeguard is mainly preventive and that successful prevention would reduce the need for rescue and treatment, the proposed framework could play a vital role in accident prevention and safety promotion (pre-event). Water safety educators can emphasize the in-event issues to prepare aquatic professionals and the general public to handle an emergency situation. Finally, post-event issues can help to generate feedback in all variables that are involved in a drowning episode.

Research indicates that approximately one in five people who survive a close brush with death report a unique subjective state of consciousness known as a near-death experience (NDE). Such close brushes with death include drowning, and NDEs are often psychologically profound experiences with substantial and long-lasting implications for near-death experiencers’ (NDErs’) lives. Survivors of drowning-related NDEs might report their experiences to the lifesaving professionals who rescued them, and research indicates that how professionals respond to NDE disclosure can influence for good or ill the trajectory of NDErs’ processes of integrating the experiences into their subsequent lives. Two factors that seem to contribute to a helpful response to NDE disclosure are accurate knowledge about NDEs and knowledge of recommended interventions.

Beginning in 1959, a 21-year observational study at Orchard Beach, Bronx, NY was carried out. This method conformed to the qualitative research methods. It was not ethical to use a treatment and control experimental design at Orchard Beach. The research question was “Is there a difference between a drowning person and a swimmer in distress?” Filming the struggle and rescues of drowning people upheld the research hypothesis. The qualitative study documented there was a difference between a drowning person and swimmers in distress. Pia developed the prevailing water crises classification. The drowning vs. distress defined feature categorical classification was first shown in On Drowning. Categorical classifications were discussed comprehensively in Reflections on Lifeguard Surveillance Programs.

The Instinctive Drowning Response represents a person's attempts to avoid the actual or perceived suffocation in the water. The suffocation in water triggers a constellation of autonomic nervous system responses that result in external, unlearned, instinctive drowning movements that are easily recognizable by trained lifeguards. Here are the characteristics of the Instinctive Drowning Response.

■ Except in rare circumstances, drowning people are physiologically unable to call out for help. The respiratory system was designed for breathing. Speech is the secondary or overlaid function. Breathing must be fulfilled, before speech occurs.

■ Throughout the Instinctive Drowning Response, drowning people cannot voluntarily control their arm movements. Physiologically, drowning people who are struggling on the surface of the water cannot stop drowning and perform voluntary movements such as waving for help, moving toward a rescuer, or reaching out for a piece of rescue equipment.

■ From beginning to end of the Instinctive Drowning Response people’s bodies remain upright in the water, with no evidence of a supporting kick. Unless rescued by a trained lifeguard, these drowning people can only struggle on the surface of the water from 20 to 60 seconds before submersion occurs.

Observations at Orchard Beach over a 21-year period revealed that drowning people were often surrounded by patrons who did not realize that a drowning was occurring next to them. It is vital that new lifeguards be trained to rely on their assessment of the signs of drowning. They must be instructed to begin saving the drowning person based on their scanning assessment. Unseasoned lifeguards cannot wait for patrons or more experienced to tell them that a person is drowning.

The RID Factor of Drowning

Most swimming-related deaths are unwitnessed drownings in which neither the lifeguard nor nearby swimmers noticed the drowning person struggle and slip below the surface of the water. A research study examined published accounts of drownings in the United States from 1910 to 1980. This assessment pointed out when active drownings occur the lifeguard failed to Recognize the instinctive drowning response, secondary duties Intruded on the lifeguard’s primary responsibility, patron surveillance, occurred, or there was Distraction from surveillance duties. Understanding the RID Factor can be used to keep the patron surveillance system operating properly.

Recognition. A vast majority of a lifeguard’s time is spent in preventing people from either engaging in dangerous practices or placing themselves in perilous conditions. When the preventive work of a lifeguard is effective, potential life-threatening conditions are corrected before rescues or injuries. Drowning and distress are the two types of water crises. Distress involves a swimmer who is unable to return to safety without help. The United States Lifesaving Association built on the original 1970 water crisis classification and added thirteen distressed swimmer descriptions to their training manual. Drownings can be subdivided into two groups; the instinctive drowning response and passive drowning people. Because of a sudden loss of consciousness, the passive drowning person slips under water without waving or calling out for help or struggling on or beneath the surface of the water. This emergency is caused by a heart attack, stroke, hyperventilation, a blow to the head, cold water immersion, or excessive alcohol consumption.


Intrusion. Miller & Rice discuss open systems organizational theory. In this model, organizations are open systems that import, convert, and then export services or products. Parks and recreation departments take in individuals provide leisure activities, and individuals return home. Unfortunately, these organizations have limited finances and are often overworked and understaffed. A lifeguard performing surveillance work might appear available for more duties. Since emergencies can occur when few bathers are present, lifeguards should never be assigned recreational or maintenance duties during patron surveillance. Lifeguards cannot clean aquatic facilities, rent beach umbrellas or chairs, taking admission tickets, or giving swimming lessons when they are or should be part of the surveillance system. Asking lifeguards simultaneously to coach swimmers, perform maintenance duties, and watch bathers increases the likelihood of a drowning or injury occurring.

Distraction. Distraction occurs when lifeguards engage in social conversations or daydream. Young children can sometimes struggle for only 20 seconds before submerging. I think, any lifeguard who takes his or her attention away from patron surveillance for more 10 seconds is inattentive to bathers. This strict standard of care can be met if lifeguards receive regularly scheduled breaks from their surveillance duties. In the United States, the American Red Cross’ lifeguard manual notes “You should take a break at least once an hour.” The USLA encourages providing continuous surveillance duty lifeguards with a 15-minute every hour.

You have read the module “Lifesaving Related Theories and Models”. Great!

Now, why don’t you take 20 more minutes, to answer some questions, for testing your understanding? If you answer correctly, you will get a Certificate of Accomplishment.